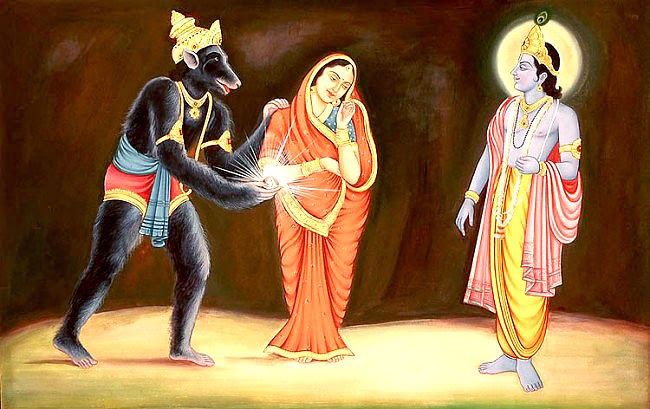 Syamantak Mani:
The story of Syamantaka appears in the Vishnu Purana and the Bhagavata.
It is a common belief that this jewel adorns the necklace of Lord Surya (the sun god). It is said to have a brilliant blue hue that instantaneously blinds the onlooker. If it is taken in darkness, it fills the ambience with day-like light.   It was said that whichever land possessed this jewel would never encounter any calamities in the form of natural disasters such as droughts, floods, earthquakes or famines, and would always be full of prosperity and plenitude. Wherever the jewel remained, it would produce for the keeper eight bhāras of gold daily.
--- "Four rice grains are called one guñjā; five guñjās, one paṇa; eight paṇas, one karṣa; four karṣas, one pala; and one hundred palas, one tulā. Twenty tulās make up one bhāra."  Since there are about 3,700 grains of rice in an ounce, the Syamantaka jewel was producing approximately 170 pounds of gold every day

There is an interesting tale related to this jewel:
On one occasion Satrajith, a Yadava nobleman, and a devotee of Surya, the Sun God, while walking along the sea shore, was praying ardently, when the god himself appeared before him. Seeing the god in an indistinct and dazzling fiery shape, Satrajith asked him to appear in a less blinding form, so that he could see him clearly.  On this, the Sun took the Syamantaka jewel off his neck, and Satrájith saw him of a dwarfish stature, with a body like burnished copper and with slightly reddish eyes. Having offered his adorations, the sun offered him a boon, and he asked for the jewel. When Satrajith returned to Dwaraka with the jewel, people mistook him for the Sun God, such was his dazzling glory..

Krishna asked him to present the jewel to Ugrasena, the supreme leader of the Yadavas, but Satrajith did not comply.    Satrajith later presented it to Prasenan, his brother.   Prasenan visited the court of Lord Krishna wearing the jewel. All the courtiers were amazed by the brilliance of this jewel and said to Prasenan that he did not deserve the jewel, so he should present it to none other than Lord Krishna.   But Prasenan  did not want to part with the jewel and to give it to Lord Krishna and stealthily left the court.  Later on, Prasenan went to the forests on a hunting spree and was killed by a lion. The lion took the jewel with it but was killed by Jambavan, the great one who helped Lord Rama.   Jambavan took the jewel to his cave and gave it to his children.

Following Updated on 12th November 2017
The Puranas or the Mahabharata do not say what happens to the gem after the death of Krishna and the fall of Dwaraka.

While chanting it, we will automatically review the whole "Upakhyanamâ". The second line, though addressed to Sukumara the son of Jambawan, it sounds as though telling us not to cry! We are also Sukumaras only, that means "good boys"! "The Syamantaka MaNi is for you only!", she says. We know that we have two gems of PiLLaiyar and KrishNa to bless us! This sloka can be included in formal pooja, as given in "vrata choodaamaNi Kalpamâ"
"simha: Prasenam avateet simho Jambawataa hata: lSukumaraka maa rodhee: tava hyesha Syamantaka: ll"
Posted by sarayutoayodhya.blogspot.in at 11:11